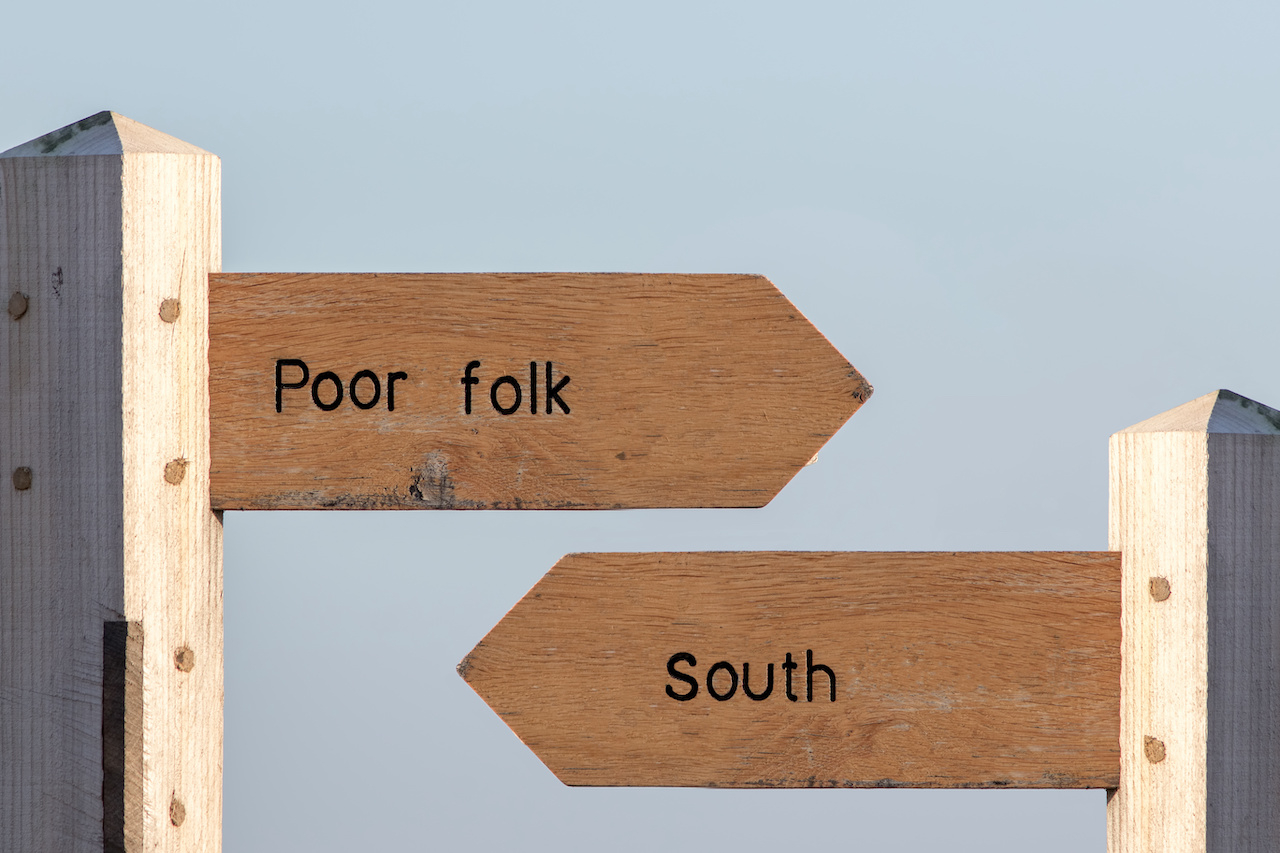 There Has Always Been A North South Divide

Like the jokey cliches “does night follow day” or “is the Pope a Catholic”? (though traditionalists wonder if that is still true in the new modernist Vatican) there has always been a North-South divide in England – economically, socially and importantly culturally.

While the border cannot be seen from space, or even seen on a map, it has always been present. This divide has been present for centuries and is deep rooted.

During times of historical national invasion the differences between the leaders of the North and the leaders of the South have been clear. In general, southern leaders have tended to acquiesce to being conquered and are happy to be client servants provided they received some financial or social strata benefits. Northern leaders tended to rebel and fight for freedoms.

When the Romans began conquering the isle of Briton southern tribes like the Deacongli, Prasutangus or Cotswold’s Dubumi were happy to be client kings of Rome. Whilst Northern tribes such as the Vacomegi or Carnonaca in the Highlands, Venicones of the Tayside, Silures of South Wales fought on.

During the initial brutal years of the Norman conquest the same pattern played out. Eadric the wild, King Swieign and Hereward the Wake fought against the imposition of Norman rule from the North and Wales whilst southern leaders adopted the new conquerors clothes and habits. They did not even react when King William angered by such northern rebellion embarked on an English genocide to starve, murder and rape the northern peoples in revenge.

“Made no effort to restrain his fury and punished the innocent with the guilty. In his anger he commanded that all crops, herds and food of any kind be brought together and burned to ashes so that the whole region north of the Humber be deprived of any source of sustenance”

Thus there developed a two tier philosophical approach to living on our island. The first that would collude with the invader and acquiesce and adopt their cultural mannerisms and a second that believed in the islands natural history, culture and belief in self governance. This division has played out on other occasions where a desire that England and latterly Britain wasn’t good enough unless it absorbed the superior culture of another. Henry VIII, Elizabeth I, Churchill and the Vote Leave campaign that believed in national sovereignty and the Popists, Mary, Pro Germany, Pro Eu campaigns that believed in the superiority of the European culture and desired its takeover.

Though the Brexit campaign did have support in Scotland and parts of Northern cities dominated by universities filled with non northern born students, the campaigns were not about historical north south divides rather a distinction to reinforce Scottish independence or a hatred of the Conservative party and England.

Alongside philosophical divide grew another of the main defining characteristics of Britain snobbery and class. As the Romans and Normans imposed their will they also imposed their culture. As they had the wealth and power those that wanted to maintain their influence as client servant kings or barons needed to ape these more “sophisticated” and “erudite” behaviours. Whether it was dispensing with their natural language to speak in Latin or French or dress as the victors dressed and adopted their mannerisms the wealthier southern leaders began to see themselves as set apart from their people. The further the wealth and new culture failed to reach the more those leaders developed a sense of superiority.

Snobbery first and the class system developed alongside each other and often was an inhibitor to northern people succeeding. The brilliant engineer George Stephenson famed for building the first public inter-city railway line in the world to use steam trains, faced discrimination from being born and bred in Northumberland, which led him to privately educating his son, to ensure he didn’t face the same issues. One example of hundreds that litter our nations history.

Yet though the definition of class has changed today more from wealth to lifestyle, and economic prosperity is relatively more widespread than many decades ago, I still detect a sense of snobbery that originates in the South, or more particularly London, especially from the political, media and business class, many of whom are trapped in the Westminster’s own eco- system.

In a recent survey, over a quarter of people feel discriminated because of regional accents. They feel that there accent affects their life chances. In another survey conducted by law firm Peninsular, 80% of employers admit to making discriminating decisions based on regional accents.

We saw this during the EU referendum when many well healed, university educated politicians refused to accept the referendum result. This included dozens of politicians of Northern constituencies, blinded by the glamour of Westminster, who conveniently forget their own constituents voted in a majority to leave the EU or couldn’t accept they understood what they voted for. That intellectual snobbery, developed and honed in the new citadels of snobbery, Britains universities, fuelled by the cultural snobbery of Europeanists and imbibed historical snobbery of the  collusionists has created it own broader class of division that dominates Britains elites today

The government’s attempts to bridge the economic divide between the North and the South is a noble aim, but throwing money and more investment into one area will not solve the issues at hand.

The creation of devolved roles, like the Manchester mayor, in an attempt to put Manchester on a footing with London, seems like an attractive proposition, until it dawns on you that all it will achieve is the transfer of more power and money to the Labour party – the party which has a 95 – 1 majority on the city council. Instead of creating cohesive unity it will lead to greater sectarian political divides.

We as a nation will become more socially and culturally enriched when our political, business and commentator class stop pretending and speaking as if the North of England is some distant land. Stop pretending that voters don’t know what they are doing and actually listen to their concerns and act upon them, promote the talented individuals, accents and all, into senior positions  in the same way women, LGBT or ethnic minorities are currently considered. Maybe even have a Prime Minister from a Northern working class estate who doesn’t believe in marxism or perhaps that’s a step too far for our elites!

This article first appeared in LIBERTATIO in October 2020